Kino was founded originally in 1993 as the Kino Film Club, set up to carry on the work of the legendary Aaben Cinema in Hulme, known for its showing of art house, classic and cult movies throughout the 1980s. Kino started life as  a gorilla film club screening movies in venues throughout Manchester, from pubs to clubs, to church halls and outdoor festivals. This developed into festivals which ran until 1996 until a time when energies were refocused on short film and the establishment of Kinofilm Short Film Festival.

In 2012, the film club made a return as Kino’s Aaben Cine Club, carrying on as a homage to what was once the greatest cinema in Manchester. From time to time the Cine Club will pop-up to show some of the films that were the faves of the picture house now gone. Recent screenings include double bills of Betty Blue + Diva, The Tin Drum + Freaks, and Withnail & I, and Blade Runner (Director’s Cut). Look out for the Aaben Cult Cine screenings coming soon to a venue near you. 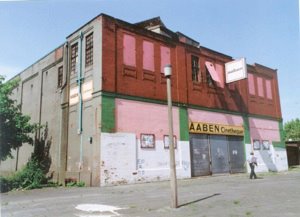 By Ceropegius (Own work) [CC-BY-SA-3.0  via Wikimedia Commons

The Aaben Cinema in Hulme used to be run by John Kino (aka John Wojowski) from 1984 -1990. The Aaben was a cinema for the people and led the way for Arthouse Cinema in Manchester. It played host to many cult classics of the time and was a hive of activity and film culture. The Kino Cult Cine Club has been set up to play host to some of those early treasures.

Recent screenings of Bladerunner and Withnail & I have been held at The Lass O’ Gowrie  – forthcoming events will be listed on the the newsfeed and on the Kino Cult Cine Club Events page.